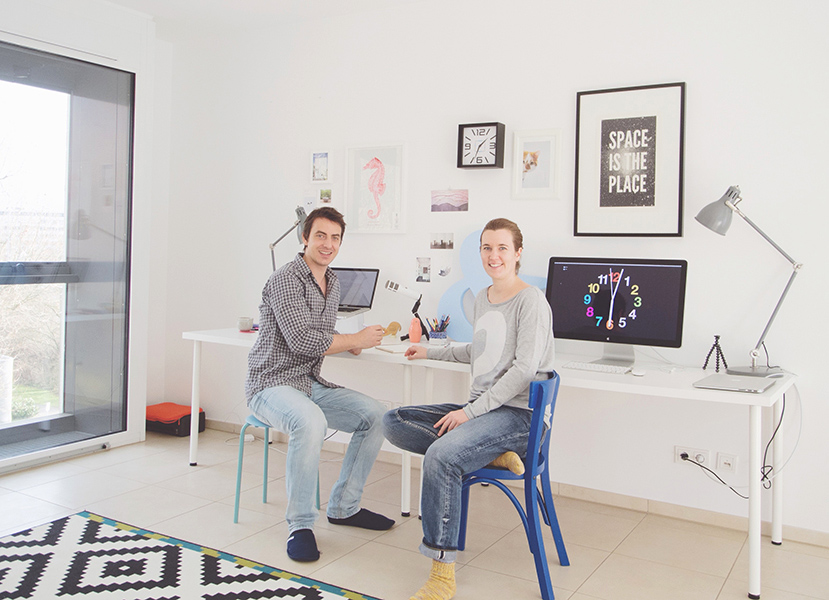 Devin Price of WP Theming recently interviewed Ellen Bauer and Manuel Esposito of Elmastudio about running your own theme business, selling on WordPress.com, and much more. You can listen to the interview or read the transcript. It’s a great peek inside a successful theme business. Here are a few of my favorite quotes:

Ellen, on the hardest parts of running a theme business:

You have to find a work routine yourself and be consistent. Over the long run, if you want to do your work or job for a couple years, you have to think a little bit ahead. I think this is what we’ve learned over the last years, that consistency is most important. You have to be there for your customers and for your people.

All of the stuff that’s happening in your life and around you. It could be food. Print magazines are great inspirations for typography, the detail stuff. But the main designs, the layout, the conception- it comes from weird stuff actually.

Ellen, on focusing a design:

From our experience, we just have the most fun and we can do the best job we can if we do design we just love and we would use. It’s okay, not everyone loves our style of design. I think it’s totally okay because there are so many solutions to doing a WordPress design.

Ellen, on selling themes on WordPress.com:

We always try to do very minimal themes and do them, if you can say, the WordPress way – don’t do a very custom development style, so it’s not that hard to get the themes [to] work on WordPress.com.

Did you know we have a Premium Theme Team at WordPress.com? They’re the folks who audit all of the premium themes available on WordPress.com — that’s not just the themes we make but also the ones made by other shops too — and make sure we have a consistently amazing experience with them. Philip Arthur Moore leads that team and there’s a great interview with him on the WordPress.com news blog.

The majority of my waking hours are spent feverishly obsessing over making premium themes a world-class experience for all WordPress users. This means a lot of different things: ensuring that customers are well-supported in our premium themes forum; auditing every single line of code in every premium theme; educating the WordPress theming community on proper approaches to WordPress theme development; and with my colleagues coming up with strong, robust guidelines for developing themes the WordPress.com way.

Philip also spends a ton of time working on _s. I love everything about this quote.

It’s hard to understand the power of _s unless you see what’s built with it. Further, Ryu, A Simpler Time, and Untitled were all created using _s, but you’d never know it without being told and that’s what makes the starter theme so powerful. To date, Underscores has around 34 total contributors and it’s always open to more. I’ll continue to work on it because it provides a solid benchmark on which to grade other themes and it also gives me a chance to interact with the theming community.

Anyway, quit reading this post and check out the interview with Philip.

Recently, Ian Stewart was a special guest on the podcast by Chris Coyier and Dave Rupert, ShopTalk. Ian discussed many web topics, including WordPress (obviously!) and answered questions from listeners.

The Weekly Theme Show is a new podcast from WPCandy that should be required listening for all WordPress theme designers and developers. Both because it involves WordPress themes and, more importantly, because it’s not from developers for developers, like most of the other podcast offerings out there in the WordPress community. It’s like a breath of fresh air.

This show will discuss WordPress themes, weekly, from a user’s perspective (and not a developer’s).

It’s exciting to see something that is user-focused, and this looks to be an engaging and interesting conversation about WordPress themes from a much different angle.

As a bonus, WPCandy posted a second recording called “Aftertaste” that starts after the formal interview concluded. In “Aftertaste”, Lance and Ryan discuss the pronunciation of names, upcoming WordCamps, and how to talk about WordPress themes with users. Be sure to check this one out as well.

Our very own Ian Stewart discusses WordPress, the Toolbox theme, and much more with Paul Boag in this week’s Boagworld podcast episode: Working With WordPress.

Listen to Jeff Chandler interview our very own Lance Willett on the WPWeekly Podcast.

On July 18, Joseph Scott announced that after what seemed like, well, what seemed like a very long time, an official WordPress themes directory had returned. And you know what? It turned out to be awesome (and if you read below, it should get awesome-er). But I still had some questions and a few  details that I wanted clarification on. I bet you did too. With that in mind, here’s Matt Mullenweg and Joseph Scott on what’s happening at the WordPress themes directory.

ThemeShaper: The new WordPress themes directory is great but—and I think I speak for almost every WordPress user here—what took so long? Was it taking “great lengths to make this as painless as possible for theme authors”? Or was it something else?

Matt: Basically the system for interacting with Subversion invisibly via ZIP files took a bit longer than we thought. There is still a lot more to do to make it a fantastic experience for both theme authors and WP users, but for launch we just wanted to get in the most essential features.

Matt: Theme authors and all the different theme sites were all doing interesting things and great jobs on their own, but if you think from the point of view of a WordPress user there were a couple of big problems:

The WordPress theme directory addresses all of these, and as a bonus allows us to do a theme update mechanism like we have for plugins and give theme authors a canonical place to track their distribution.

Since there have been over 150,000 downloads in less than a month it seems to be working.

END_OF_DOCUMENT_TOKEN_TO_BE_REPLACED

This is ThemeShaper, a WordPress-powered blog and home to the Automattic Theme Division. We shape beautiful and customizable themes that make the world a better place.